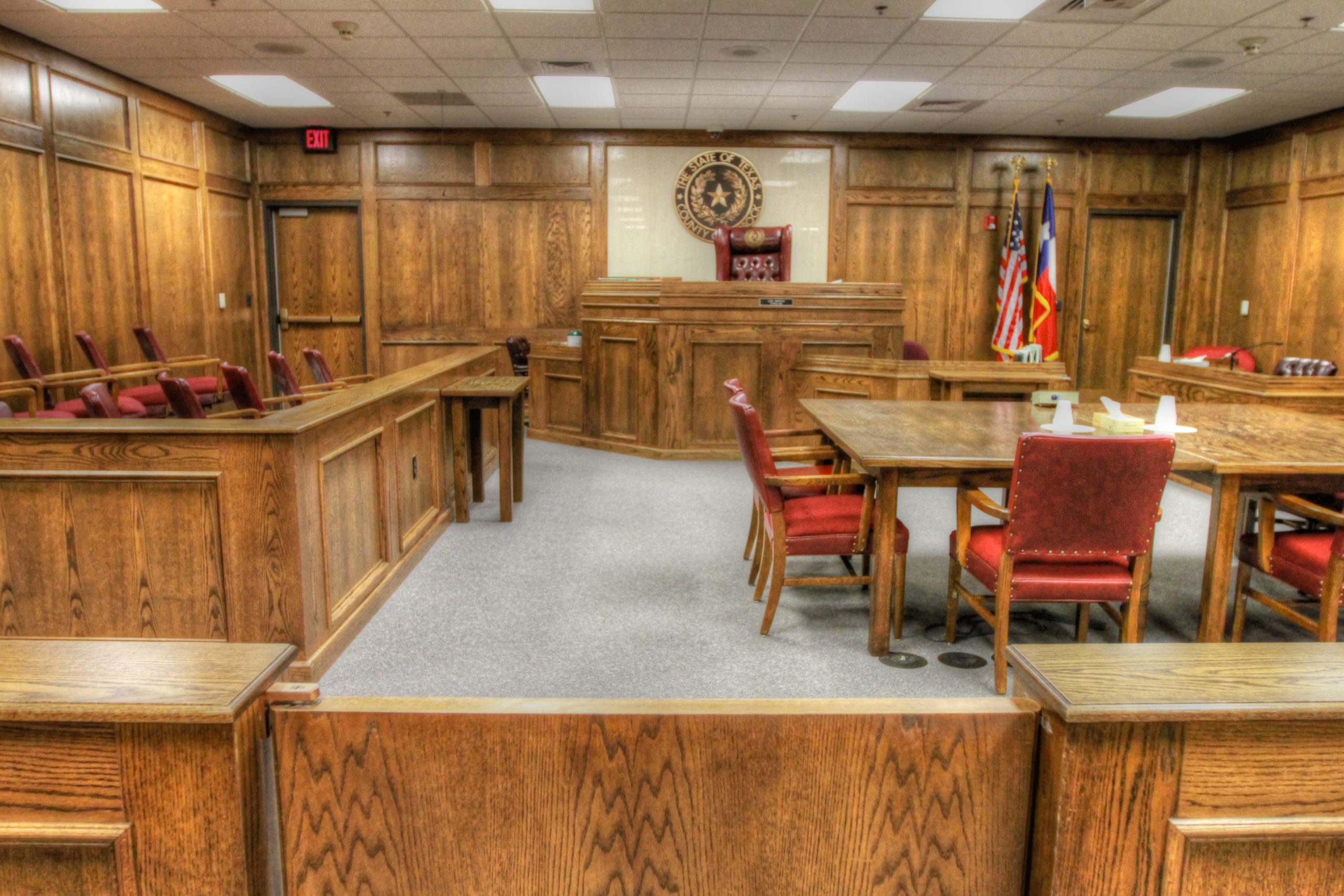 This is the first in a series of articles the McCleskey Law Firm’s history as we approach our 95th anniversary. See companion story on where McCleskey’s litigation practice is now.

The McCleskey Law firm has practiced litigation – which generally means taking a case to trial – since it began almost 95 years ago. 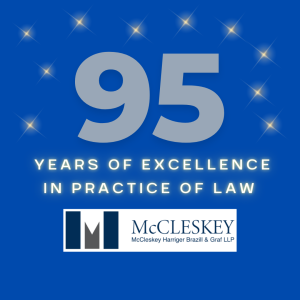 After a few decades, though, the late George McCleskey brought the firm into an era of more sophisticated litigation and its ability to handle complex cases has grown over the decades.

“We’ve handled very sophisticated litigation cases that would not have come to our law firm when I started,” said Don Graf, who joined the firm in 1962. “They would have been handled by Dallas or Houston firms. Instead, our reputation as a firm grew to the point where we were contacted by more sophisticated companies on more complex litigation.”

‘George was the perfectionist’

The firm has always been able to go to the courthouse, even in the early years of Hobart Nelson, who started the firm in 1928.

“Hobart was the kind who was more bombastic and theatrical in his presentations in court,” said Graf.

McCleskey’s approach was different, said Graf, who was around both men for a decade before Nelson retired in 1972 and the firm took the name it has to this day – McCleskey, Harriger, Brazill and Graf.

“George was the perfectionist. He prepared well, proceeded logically and convinced the jury by virtue of the facts,” said Graf.

The other difference was McCleskey’s ability to tackle complex cases.

“Like the case where we represented the Mitsubishi folks against the fellow who owned the Plainview grain elevators who misappropriated corn belonging to Mitsubishi. That was a case Hobart would have never tried because it involved a lot of paperwork. You had to even go to California to look at documents. George took us into those kinds of areas. We did litigation that took us out of West Texas to places like Los Angeles, New York City, Kansas City, St. Louis,” he said.

Some of the work was bank litigation. Then there was the time the firm represented the Murchison family – the ones who owned the Dallas Cowboys – in a cattle dispute against a feedlot, said Graf.

Graf was hired as a general practitioner – not specifically a litigator – but he litigated with McCleskey.

“In those days, we didn’t think in terms of specialization like we do now. You were expected to do all kinds of things in the way of legal matters,” said Graf, who added he enjoyed the variety – and learning from McCleskey.

“George and I were trying a gas pollution case up in Amarillo. I put our client on as our first witness. After we finished with that first witness, the four or five oil companies on the other side of the litigation were ready to settle. As we’re driving back from Amarillo, George says to me, ‘you’ve come a long way.’ That’s one of my favorite cases,” he said.

Other law firms also turned to McCleskey for help on complicated cases.

“We represented 3,000 royalty owners against oil companies in Midland because a lawyer in Seminole came to us. It was beyond his competence in terms of staff and everything else,” said Graf. “There were mounds of paperwork and 13 lawyers on the other side of the table. But we had become competent in that kind of litigation. We had the staff who could handle it.”

McCleskey was not specifically a litigator, but beside elevating the firm’s level of litigation, he was involved in historic cases, said Ben Davidson, who returned to his native West Texas from Dallas when he joined McCleskey as a litigator in 1998.

“He was primarily a business lawyer. But in helping his clients he might do a contract one week for a client, handle a business dispute, then a lawsuit – one of his major interests was protecting landowners from oil and gas companies,” said Davidson.

In Texas, Davidson said, mineral rights are more important than surface rights. So, if a farmer signed a lease allowing an oil and gas company to search for oil and gas, the companies could do whatever they wanted.

“If they want to tear up all your property, they could do whatever as long as they said with a straight face it’s because we need this now,” he said.

In the 1960s and into the 1980s landowners realized they needed protection.

“Mr. ‘Mac’ was on the forefront of trying to find ways to protect landowners from the oil companies taking more than they needed,” said Davidson.

“Let’s say you’re a farmer and have an irrigation system. The oil company just decides it wants to drill the well right in the middle of your field and that means you can’t use your irrigation system,” he said.

“He became active in a number of lawsuits in the 1960s to establish what is now called the reasonable accommodation doctrine. The oil companies now need – because of the work by Mr. Mac and other lawyers in the 1960s – to figure out how to not interrupt preexisting conditions,” he said,

“Perhaps they could build berms the farmer’s irrigation could ride over,” said Davidson.

McCleskey’s most famous case was in 1962 for the High Plains Water District on whether farmers can take a deduction for cost-depletion of water. The case has saved farmers millions of dollars in tax costs over the decades.

“Many farmers believed ‘it’s my water and I’ll be damned if anybody tells me what to do with it. I really don’t care if I pump my neighbor’s well dry and I don’t care if I leave any water for my kids. I’m going to do what the hell I want,’” said Davidson.

But the water was coming from the massive Ogallala Aquifer, which was – and is – getting depleted.

“Mr. Mac and Don Graf were involved in a number of lawsuits establishing that yes, the government can create reasonable requirements to conserve a precious resource essential to the long-term viability of this part of the state,” he said.

In addition to Graf’s litigation work, he became the first sophisticated labor lawyer in the area, said Davidson.

“Don really took his practice to another level and was able to do stuff that before, you’d have to have somebody from Dallas or Houston handle it,” he said. Some involved litigation, some didn’t.

In the 1980s, McCleskey brought on attorneys who were trial lawyers like Dirk Murchison and Mike Worley, who developed one of the leading medical malpractice defense practices in the state, said Davidson.

“We now had attorneys who primarily did litigation and really established our reputation as a full-service firm, but everybody knew as part of that we had a significant and sophisticated litigation practice,” he said.

Worley was wanting to slow down and Davidson started taking care of his medical malpractice clients.

“That was my start at this firm. But in Dallas I’d had a lot of commercial experience and so in addition to doing ‘med mal’ defense and personal injury defense I do a whole lot of commercial litigation business disputes,” he said.

“Now she’s one of the preeminent premises liability (slips and falls) lawyers in this part of the state,” he said. 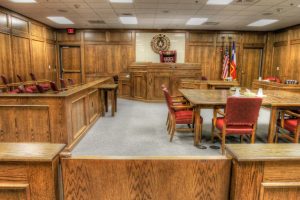 This is the first in a series of articles the McCleskey Law Firm’s history as we approach our 95th anniversary. See companion story on where McCleskey’s litigation practice is now. The McCleskey Law firm has practiced litigation – which generally means taking a case to trial – since it began almost 95 years ago. After a 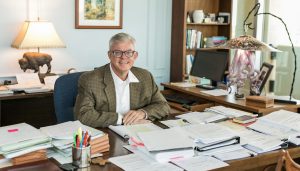 This is a companion piece to our recent 95th anniversary story on how McCleskey built its litigation practice. Building on its impressive history of litigation, Ben Davidson and Ann Stegall are the McCleskey Law Firm’s full-time litigators now, both members of the prestigious American Board Of Trial Attorneys. Other McCleskey attorneys who do some litigation

Questions? Get in touch.